To comply with government coronavirus restrictions, all work parties and other events at the station have been suspended until further notice. When these restrictions have been lifted we shall update our blog and events diary pages.

However the station site remains open so, if you are able, why not pay a visit and enjoy this peaceful location overlooking the Stour Valley. Weather permitting, there are picnic tables, benches and grassed areas for visitors to enjoy. Please though respect the social distancing guidelines and other restrictions currently imposed upon all of us.

We hope to see you again during happier times when life has returned to normal. 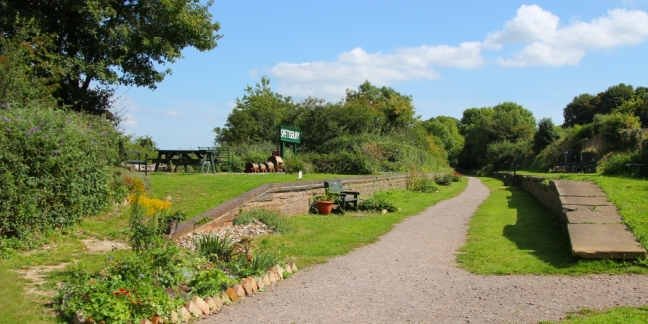 The team were saddened to learn of the passing of our friend Roy Guscott. When his health permitted, Roy was a regular sight up at the station with his little Westie dog, and always stopped to have a chat with us.  Roy had kindly donated one of the benches at the station and when this became damaged, a replacement was provided by Blandford Lions Club. We send our condolences to his family.

Since the Spetisbury Station Project started we have enjoyed a close working relationship with our friends at the Somerset & Dorset Railway Trust. We are grateful for the support they give us including featuring news from Spetisbury station in their quarterly magazine ‘Pines Express’. The S&DRT has its base at Washford station on the West Somerset Railway, which includes a superb collection of S&D artefacts, memorabilia and rolling stock as well as a recreation of the interior of Midford signal box.

We have recently learnt that the WSR has given the S&DRT twelve months’ notice to vacate the site at Washford by February 2021, despite a new 50 year tenancy agreement being signed in 2018. Sadly the actions of the WSR do not appear to be in keeping with those of a heritage railway. Now the S&DRT is faced with finding a new home for its collection. If you are able to, please support the S&DRT perhaps by becoming a member from only £18 a year or visiting their museum and shop at Washford station.

After months of wet weather and an endless procession of winter storms, it was good to be at the station today in very pleasant conditions on the first day of meteorological spring. The recent storms had caused some damage, in particular the disc and crossbar signal has lost its metal disc. When time permits, the upper half of the signal will have to be taken away and rewelded. The wildlife pond lining also seems to have sprung a mysterious leak so most of the water has drained away. This will be more difficult to repair. However it was good to see that the Dorset Council rangers have recently cut back the vegetation behind the ‘down’ platform allowing much better views across the Stour Valley. Vegetation growing from the railway bridge brickwork has also been removed which improves things greatly.

There were three of working us at the station today. Whilst Bob busied himself clearing vegetation, Kevin and Moira continued ground clearance work around the site of the signal box. Once the rubble has been cleared, the area will be sown with grass seed. A few more items of track fittings were also uncovered. Nothing is wasted – surplus soil was distributed elsewhere around the site with any large stones used to infill the signal box foundations. Another member Mick also came along with his wife Angela. Mick is our resident carpenter and we discussed the work needed to repair the running-in boards hopefully later this year.

The nice weather brought out a steady stream of walkers and horse-riders. One gentleman stopped to chat and it was interesting to learn that his father used to know a former station master at Spetisbury, and his grandfather was engaged in the work to double the track through the station around 1900.